Bundoran Golf Course was designed by the great Harry Vardon, the first golf superstar, whose 6 times win at the British Open is still the record. Born on May 9th 1870, Vardon was a pioneer of modern golf, being the creator of the Vardon Grip and also the first player to wear comfortable “knickerbockers”, to play – moving away from the traditionally worn and uncomfortable suit and tie.

Vardon and his brother, Tom, became interested in golf while working as caddies in their native Jersey on the Channel Islands. Family circumstances were poor and their father unsupportive of their interest in golf. Despite this, both brothers moved to mainland UK to pursue their golf dreams. Harry initially worked as a greenkeeper at Studley Royal Golf Club in Yorkshire before to moving Bury Golf Club as Club Professional in 1891 at the age of 21.

From humble beginnings, Vardon went on to become one of the greatest golfers of all time, winning the American Open and German Open as part of his overall haul of 48 tournaments and 21 team wins.

In 1892 he moved to Bury Golf and fours years later he became the head professional at Ganton Golf Club in Yorkshire. 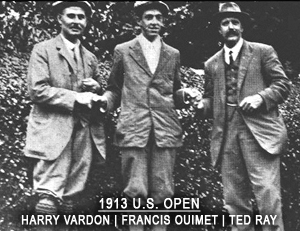 Vardon toured the US and Canada three times between 1900 and 1920. He played in the US Open on each of these visits, placing 1st, 2nd and 2nd.  His 1913 2nd place was to  Francis Ouimet, who was a local amateur player and whose win over the UK great Vardon, was seen as a sensational underdog victory.

The story of Vardon’s defeat by Francis Ouimet is told in the 2005 film, ‘The Greatest Game Ever Played’, with Shia LaBeouf as Ouimet and Stephen Dillane as Harry Vardon.

In the 2004 golf themed movie ‘Bobby Jones: Stroke of Genius’, Vardon was portrayed by Irish American actor Aidan Quinn. The film is based on Mark Frost’s 2002 book The Greatest Game Ever Played: Harry Vardon, Francis Ouimet, and the Birth of Modern Golf.


Notwithstanding this defeat, Harry Vardon was seen as a huge influence on popularising the game of golf in the US. He played exhibition matches as he toured and encouraged younger players.

The Vardon Trophy, named for Harry Vardon, is awarded annually by the Professional Golfers’ Association of America to the professional with the best scoring average.

Harry Vardon suffered from health problems as a result of severe bout of Tuberculosis in 1903. He still went on to win 2 more British Open’s after this, but retired from playing in his 50’s.  In this time he became more involved in coaching, writing and designing golf courses. Cementing his status as “golf’s first international celebrity” (wikipedia), Vardon was invited to design or remodel golf courses across Scotland, Wales, England and Ireland.

Harry Vardon is credited with designing or re-modelling over 30 golf courses across the British Isles. These include Top World 100 Courses at Woodhall Spa Golf Club in Lincolnshire and Ganton in Yorkshire. He made important recommendations for alterations that were adopted in Royal County Down, one of the World’s Top 5 golf courses.

In 1927, Harry Vardon worked on setting out Bundoran Golf Course as a championship course, a design so popular that it has been retained at Bundoran to this day.


Harry Vardon’s contribution to the game of golf has been enormous. He developed a more upright swing which meant that the ball could be placed with more accuracy, while he popularised “The Vardon Grip” still used by golfers today. He wrote golf manuals of which  The Gist of Golf and The Complete Golfer are considered classics.

Harry Vardon was famous as one of The Great Triumvirate, a trio of rivals at the top of the game from the mid-1890s to the mid-1910s. The other 2 members were James Braid and J.H. Taylor, and together they dominated the world’s golf scene for over a decade.